My look inside Coco's apartment

So while I know everyone was following my adventures from the front rows of the Haute Couture shows, one more intimate moment I had while in Paris was a private tour of Coco Chanel's apartment, which lies on the third floor of the uber-exclusive and very private Haute Couture Salons. It is on the floor below where the 1% of the world are custom-fitted for their latest couture creations from the house that does it best.

Upon entering her hideaway at the summit of the famous mirrored stairs, I was instantly shocked by the radical transition from the Art Deco world below into this Chinoiserie wonderland behind an unassuming door. The Apartment has a total of four rooms, the Foyer, Sitting Room, Dining Room, and a second sitting room that was used for more intimate moments and fittings (The kitchen has been totally modernized to serve the salons below, and yes, there WAS a bathroom, but it has since been converted into an office).

In the entry hall, one is greated by two Blackamoor statues (late in life, Coco would joke that they were her "boyfriends"), a carved Bergere chair (a similar piece to her original chair, which came from Karl Lagerfeld's home on the Cote d'Azur), and two large carved mahogany Chinese screens (what are called coromandels). In between the two screens in a niche hangs an ornate Austrian mirror Coco purchased from an antique store. There are four significant stories to this mirror; first, the ornamentation at the top of the mirror shows a double headed eagle, a symbol of the Romanov dynasty in Russia. Many of Coco's friends and first clients were displaced Russian royalty (not to mention one of her rumored lovers, Igor Stravinsky). Second, the mirror itself is the shape of an octogon, the same shape of the Place Vendome (only a block away), which inspired the same shape of the stopper in the original bottle of Chanel No. 5, still manufactured today. Third, at the bottom, the mirror is ornamented with wheat, which in the French countryside from where Coco originated, symbolized good luck and prosperity (the wheat motif is constantly revisited by Karl). The fourth significance is the mirror's origin of Austria; Coco was heavily inspired by the Austrian military's coats, which would serve as the basis for her now-iconic little black jacket. 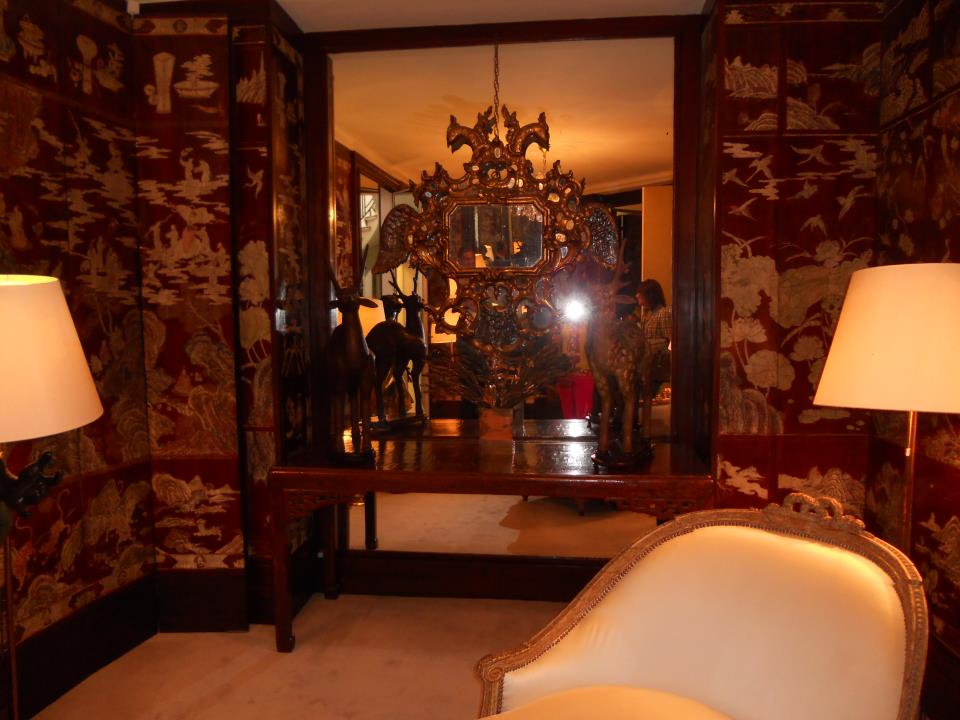 Next, I made my way into her famous sitting room through a mirrored door. This room is a treasure trove of personal items collected over her lifetime, each with great significance. The walls are covered in gilded canvas (an ordinary material still today) and the draperies are linen (another lowly fabric unused in home decor at the time). One highlight is the wrought iron and quartz chandelier (those aren't crystals!), which was designed by Chanel. In the twists and curves of the chandelier, you can see cursive "G"s at the top (her first name was Gabrielle), then CC's like her logo, then the number 5 for her perfume, and then the letter "W", which stood for Westminster, a Duke she was dating at the time the chandelier was made. The Quartz crystals of the chandelier served as inspiration to Karl Lagerfeld for his Fall/Winter 2012-13 collection, which is trickling into stores now. 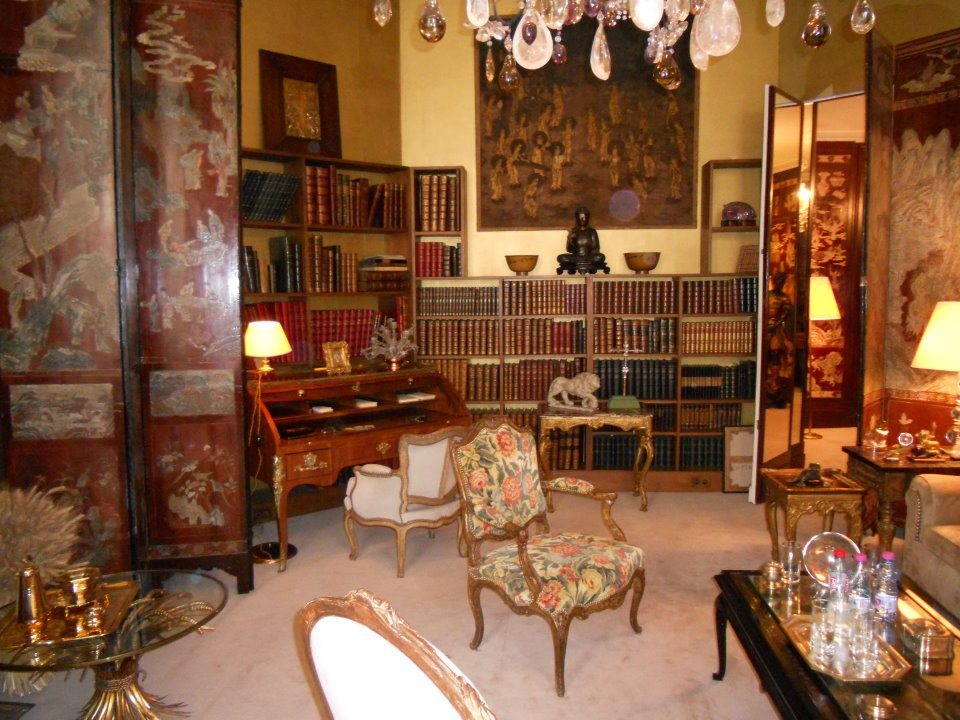 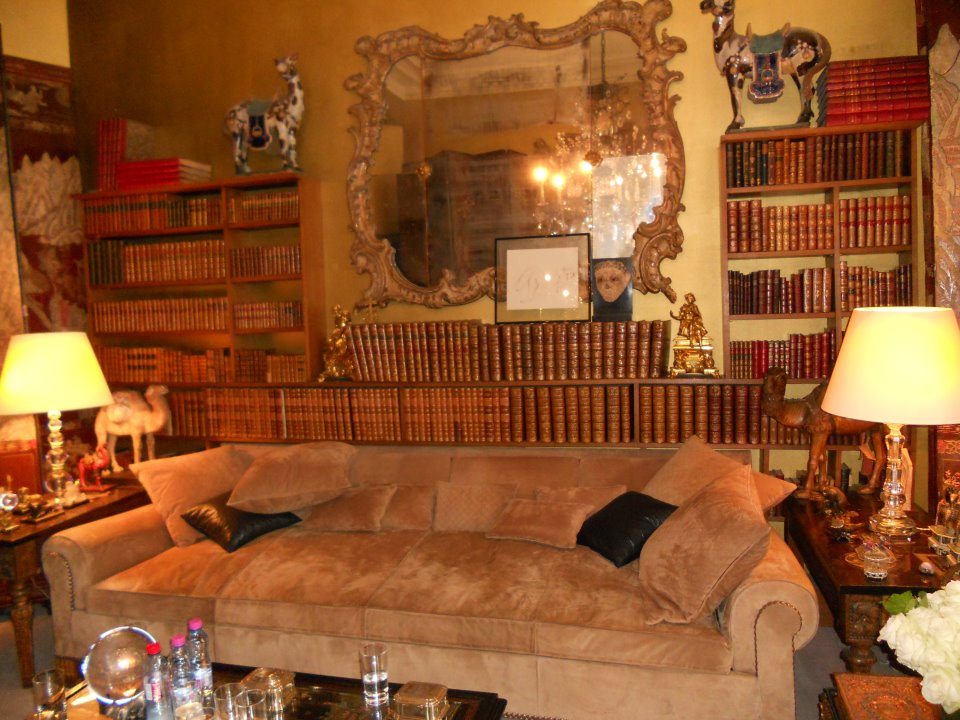 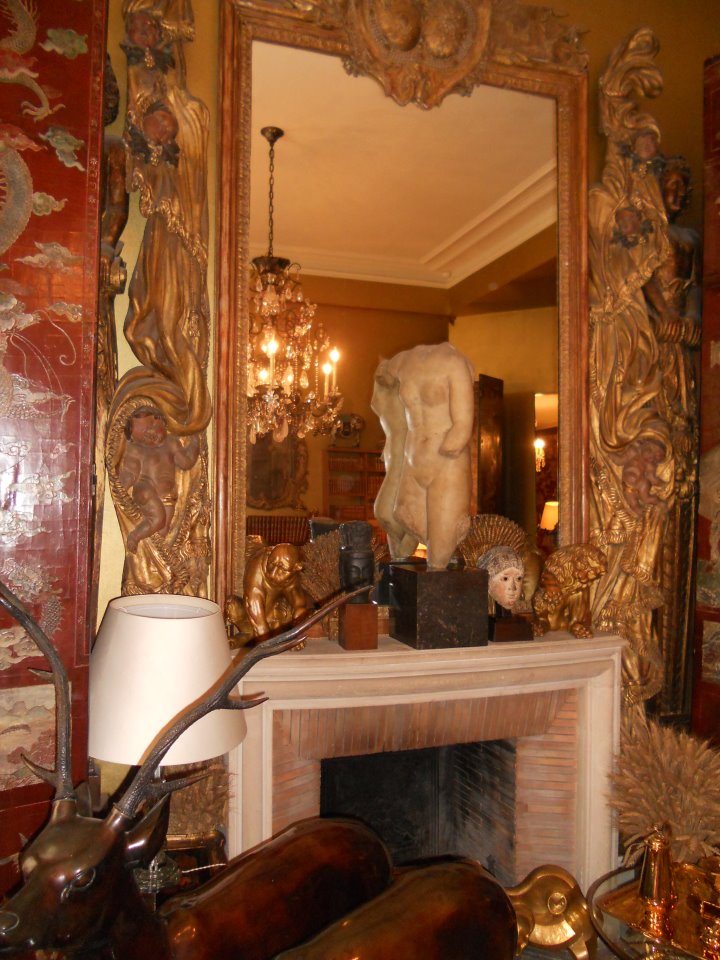 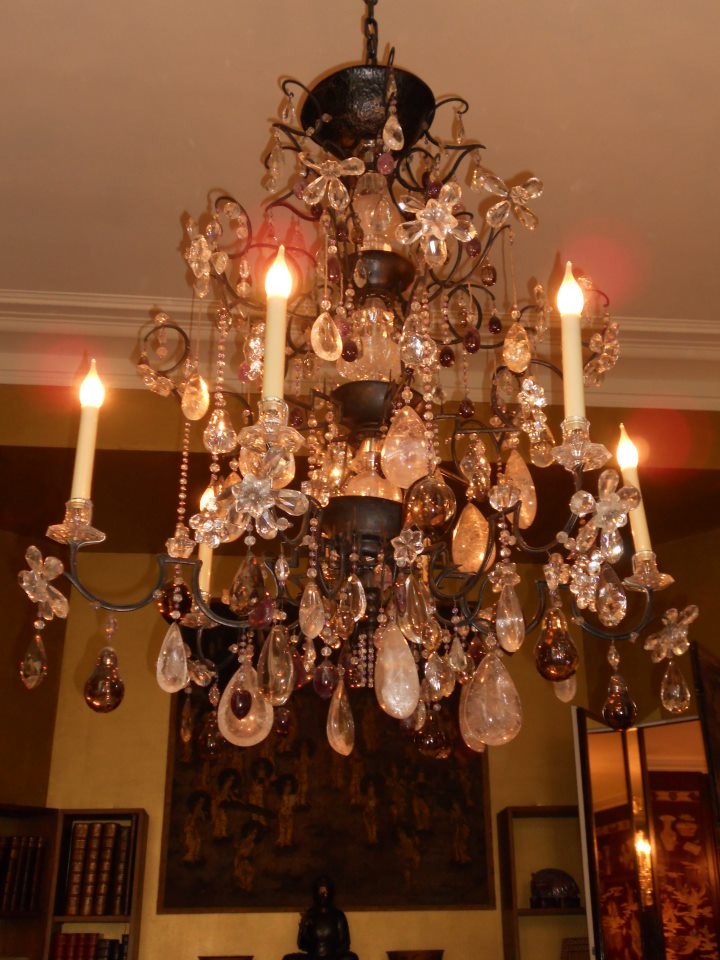 The room is dominated by more Coromandels and a huge collection of books. Coco had no upper level education, but, like many designers, had an unquenchable thirst for knowledge and was passionate about reading. Her famous sofa is another highlight, made famous by its suede upholstery, a materal that had never been used for furniture before. The pillows for the sofa are quilted, just like the handbags, and pairs of animals flank the bookcases that sit behind it. While Chanel never married (a side effect of her parents' divorce and her father's subsequent disownership), she strongly believed in marriage and partnerships, and always displayed her collectables in pairs. The andirons in her fireplace are by Lipschitz, a close friend of Coco's, and the bronze "wheat" table to the right is by Goossens, the fabled jewelry house on Avenue Georges V that still produces all of Chanel's costume jewelry.

In the smaller sitting room off to the right, Chanel would have more intimate meetings, as well as fittings with her models. The entire room is "wallpapered" with Coromandels; she literally cut up these now-priceless antiques to cover three of the four walls of this room; even the door leading to the kitchen was disguised behind a carved panel. Chanel had an obsession with China, but never actually visited, as politics and wars kept her away. The subject was revisited in 2010 with the Paris-Shanghai Pre-fall collection, as well as a short film made by Karl Lagerfeld depicting Chanel falling asleep and dreaming of China. The chandelier in this room is from Venice, a place she frequented and was introduced to by another lover, Boy Capel, and is blooming with glass Camellias, her favorite flower. Chanel loved camellias because they were scentless, which meant she could wear a camellia on her jacket and spray herself with No. 5 and the scents would not fight eachother. The room is now mostly unfurnished. 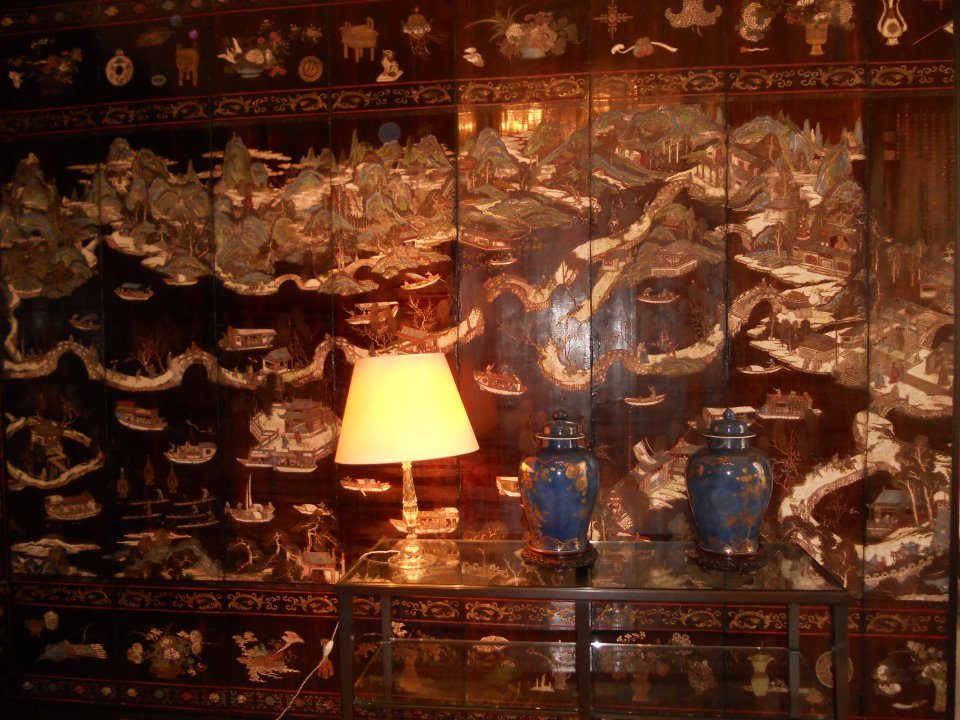 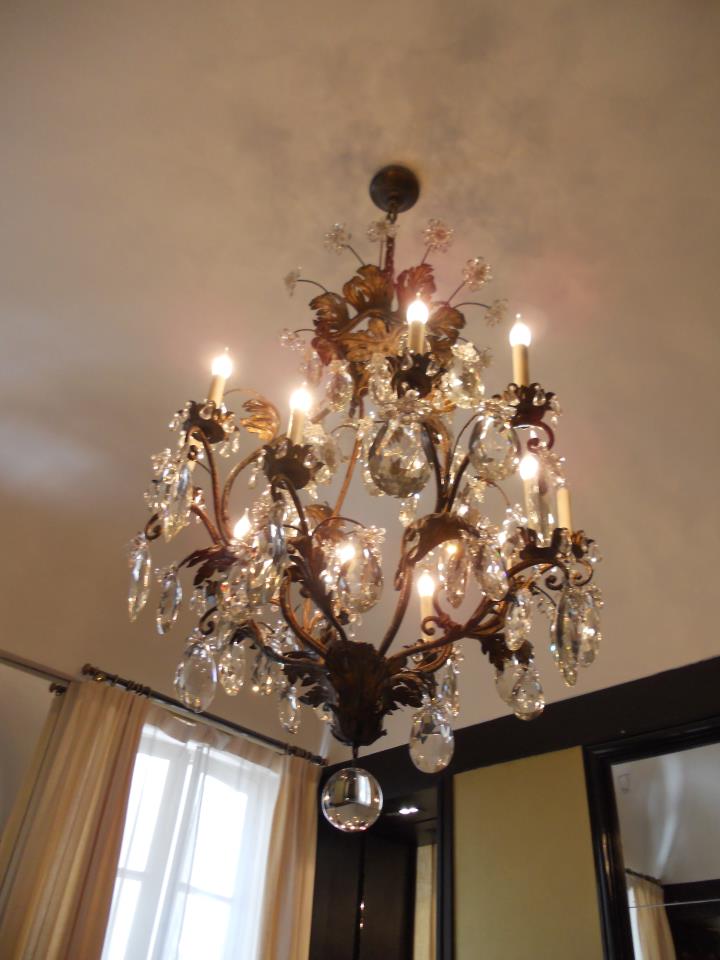 In the Dining room, there are more Coromandels, as well as a very unorthodox country table, and minimalist chairs also upholstered in suede.  On the table rest several lions, Coco's astrological sign. Astrology also greatly influenced Chanel throughout her life, and the stars served as her inspiration for the Haute Joaillerie collection, which she originally designed 80 years ago in 1932. The story her fine jewelry line is interesting as well: In the height of the Depression, many London diamond dealers were sitting on overflowing inventories of diamonds. Through the Duke of Westminster, Coco was given a large lot of diamonds to do with as she pleased, in an attempt for the jewelers to spark new interest and drive sales. Her collection was so explosively popular, despite the economy,  that the many jewelry houses that still line the Place Vendome all petitioned that Chanel stop designing jewelery immediately, as it was not "her field" (back then, fashion designers ONLY did clothes, and jewelers ONLY made jewelry, etc). Unabated, Chanel continued expanding her brand, as her original jewelry designs continue to captivate Chanel's many haute couture clients.

The mirrors in each alcove came from Spain, and when they arrived at Chanel's apartment, they didn't quite fit. In true Chanel fashion, Coco had the workmen simply bend the bronze frames to "make" them fit! 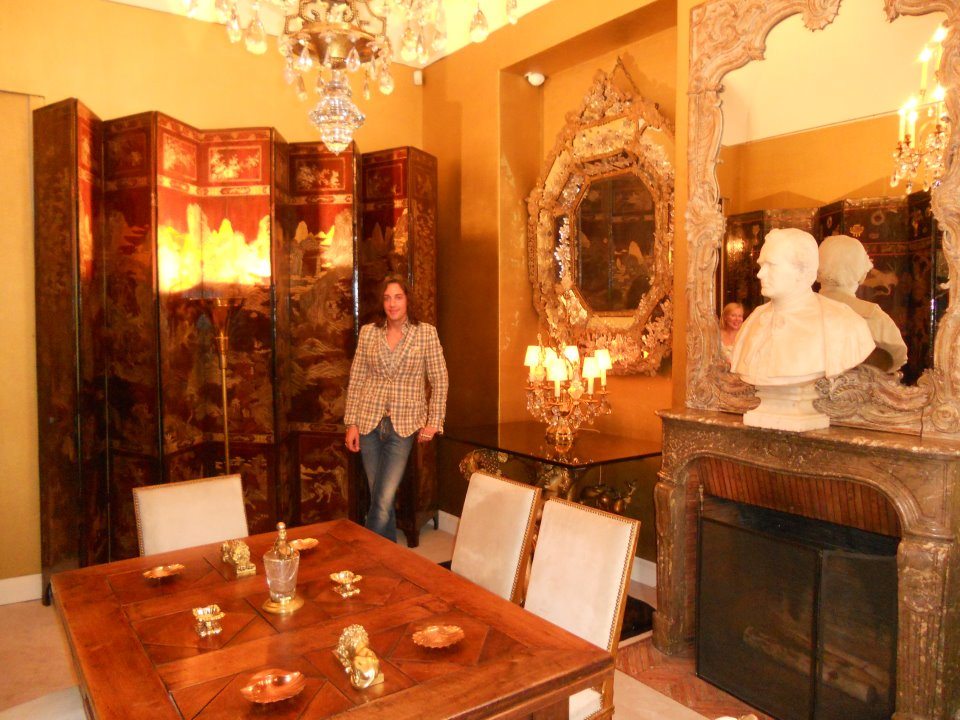 You may have noticed that the apartment does not have a bedroom. For all of the years Chanel spent collecting, furnishing, and maintaining her apartment, she never once spent a night there. Coco kept a room at the Ritz (which is also situated on the Place Vendome, and sits conveniently across the street from her apartment). At the end of each day, she would leave her apartment, lock the boutique doors, and walk across the street to the back entrance of the Ritz, where she would retire for the evening. She did this purposely because she did not want any of her employees catching her with any of her "gentleman callers." Though she was an extremely progressive and thoroughly modern women, at the end of the day, she still was a lady. 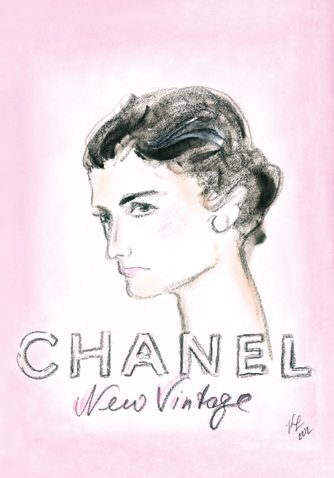